Why Your Tool Box Should Include Optical Screens

AV Designers: Why Your Tool Box Should Include Optical Screens 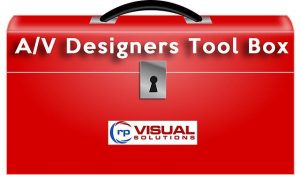 Here are some real world examples from our Race to Black series. Let’s use a room with an ambient light level of 30fc and a screen with 10fc of light on it. Using a typical projection screen, which has an ambient reflected value of 35%, the best black level possible would be 10 x .35 = 3.5fc. To get a 20:1 contrast ratio you would have to have a projector that would enable the white point to be 3.5×20 = 70fc. That is achievable but very bright and uncomfortable to look at. Realistically, you would have to have a projector achieve 30fc and no more to be comfortable, and the max contrast would be 30 / 3.5 = 8.57:1. Viewable, but poor at best.

At the end of the day, it’s easy to see based on the example above that an optical screen can make a huge difference in image quality. The room was barely capable of supporting projection originally, but with an optical screen, it was capable of achieving great contrast and image quality. So where prior a good designer would have only used a light-emitting technology such as a flat panel or direct view LED, now a projection system could be used. Combine that with the fact that it really is a race to black, optical screens are a must-have in every designer’s toolset.

AV Designers Why Your Tool Box Should Include Optical Screens
Contrast is King!
Double the Power, Double the Contrast
Contact